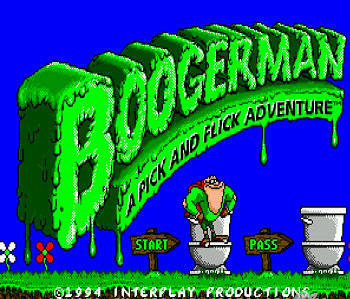 He thinks he's a hero, but he'snot! He's mean. He's green. And he nose how to pick a fight!
— "Anatomy of a Superhero" ad
Advertisement:

Boogerman: A Pick and Flick Adventure is a 1994 Platform Game made by Interplay Entertainment for the Sega Genesis in 1994 and the Super Nintendo Entertainment System in 1995, with a strong focus on Toilet Humor.

Snotty Ragsdale is an Eccentric Millionaire who takes a janitorial job at Professor Stinkbaum's lab to investigate a machine which vows to get rid off all of the world's pollution to another dimension. During this time, he accidentally sneezes into the machine and a hand grabs the power source, causing Snotty to go into the other dimension and retrieve it. He became a playable character in ClayFighter 63⅓ for the Nintendo 64, where he's The Rival to Earthworm Jim.

to make an HD reboot of the game was attempted, but it failed. In 2020, the game comes part of one of the titles of the "Interplay Collection" for the new handheld console Evercade.