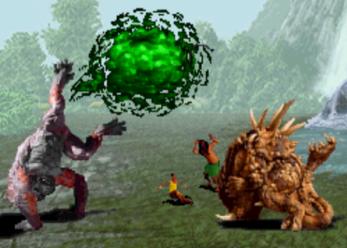 It took six hours of eating baked beans, but the end result's totally worth it.note At least, until the stomachache kicks in.
"You know how most dragons have fire breath attacks? Well, it's like that. Only it's not breath. And there's no fire. But it will feel like you're roasting alive."
— 8-Bit Theater "Too Many Dragons."

In real life, the powers of flatulence are largely limited to clearing a room. And perhaps serving as an impromptu blowtorch, if you're really, really dumb. It's different in cartoons, though. There, the lowly flatus is often elevated to the status of Weapon of Gas Destruction:

Largely limited to shows or video games geared at kids, because adults tend to have a lower tolerance for Toilet Humour. Unless the show in question is a Grossout Show, to begin with.

This trope has little to do with the real-life petard, a siege explosive ironically derived from peter, the Medieval French verb for 'breaking wind'.

In Video Games, the user tends to be male most of the time. Even female characters that attack with their rear ends are usually portrayed as cutesy or graceful (though the latter a rarer example) and tend to be portrayed as hygienically conscious, so doing such an action willfully is out of the question most of the time for girls. Males who do this that are also human tend to be portrayed doing other things such as scratching their rear ends or other similar actions.

Sub-trope of Weaponized Stench. Compare Weaponized Exhaust for a non-biological version, and Butt Cannon. Related to Excrement Statement and Dung Fu, an extension of Ass Kicks You, as well as an extension of Toilet Humour. Often involves a Visible Odor. Can be a Revolting Rescue if it saves someone. Also see Ass Shove and Gasshole.

The Any Malu Show

The Any Malu Show