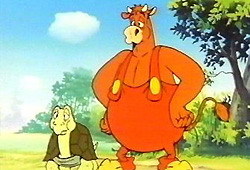 Ox Tales is an anime series based on the Dutch comic strip "Boes" that aired from 1987 to 1988. Like a few other anime series, such as The Littl' Bits, The Noozles, and Wowser, the series was distributed by Saban Entertainment in the US.

The series follows the adventures and misadventures of Ollie, a good-natured yet simple-minded anthropomorphic ox who runs a place called the Funny Farm, which consists of just about every kind of animal that you can find in the world. Ollie is also joined in his adventures by his best friend, Jack the turtle, who often acted as the voice of reason when Ollie's hairbrained schemes always went haywire. Other characters of the series included Towilla, a sarcastic toucan who served as the Character Narrator of the series, Moe, a mole who often pops up from time to time to laugh at a comedic situation, Audrey, an ostrich who always has her head buried in the ground, Sammy, Ollie's faithful dog, and Edward, an elephant who Ollie will often use as a fire hose when the situation calls for it.