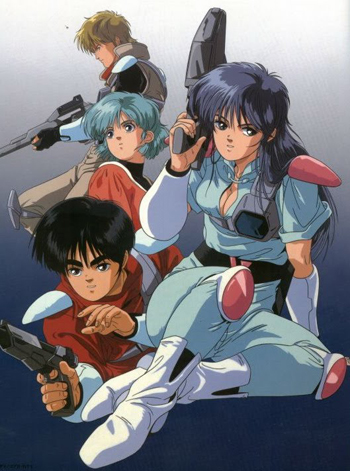 The White Knights. From the forefront to the background: Apple, J.J., Amy and Champ
Advertisement:

Red Photon Zillion (赤い光弾ジリオン, Akai Kōdan Jirion, also known as just Zillion), is a Sci-Fi Anime that ran from April 12, 1987 to December 13, 1987 on Nippon Television in Japan and was produced by Tatsunoko Production and Sega. Thirty-one episodes were made, as well as an original video animation (OVA) movie titled Zillion: Burning Night. After the production of the anime, Tatsunoko Production and Mitsuhisa Ishikawa, the producer of Zillion, established Production I.G to obstruct the dispersing of the excellent staffs of Tatsunoko branch which had done actual production. Therefore, Zillion is considered to be Production I.G’s first work.

In the far future, humankind has spread to other planets and solar systems. It is the year 2387, and humankind's most successful off-world colony is the planet Maris, a world so Earth-like that many call it Earth II. But the Marisians are in danger. The colony is under siege by the Noza Empire, a savage race of warrior-cyborgs from a distant star system that intends to kill all humans in order to lay eggs and reproduce on the planet. The Noza are seemingly invincible and indestructible, and the Marisian Defense Forces are severely outclassed.

All hope seems lost when a trio of guns of immense power are found by the colonists and dubbed the "Zillion Weapon System" after the ancient civilization that created them and the substance "Zillium" that powers them, a mysterious substance which cannot be analyzed or reproduced, and is therefore irreplaceable. Regardless, the molecular disruption beam of the Zillion Gun is far more powerful than any weapon devised by man, and it is the only thing strong enough to destroy the Noza.

An elite fighting force called "the White Knights" is quickly created, with three young Marissian colonists: J.J., Champ and Apple, chosen and specially trained to use these weapons. They are the last hope for survival for the colonists.

Opa-Opa, of Fantasy Zone fame, was a minor recurring character on the show.

Despite the cult success of the video games, the Zillion anime received only a very brief release in the early 1990s in the United States. The first five episodes of the TV series, as well as the Burning Night OVA were dubbed and released on VHS by Carl Macek’s Streamline Pictures line. This anime was featured in the music video for Michael Jackson and Janet Jackson’s collaboration "Scream."

In 2018, Funimation announced that they had obtained the license for the series and released the complete series in October.