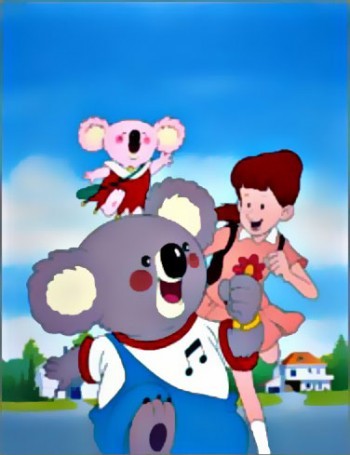 Trust us, it isn't as boring as this picture suggests.
Advertisement:

Also known as The Wonderous Koala Blinky, The Noozles was a 26-episode series by Nippon Animation Company that was originally released in Japan in 1984 and aired on the Fuji TV network. In Japan, it was the result of a brief Koala fad that swept the country after the birth of a Koala within the Tama Zoo in Tokyo and the later addition of several more koalas as a gift from the Australian government (Adventures of the Little Koala has a similar history). Noozles was dubbed by Saban International and got its greatest prominence in English when it was endlessly rerun on Nickelodeon from 1988 through 1993.

The show starts out as a simple story about 12-year-old Sandy, who receives a package from her long-lost grandfather that was recently recovered from a shipwreck. The package contains a stuffed Koala. Upon Sandy giving the Koala a "Noozle" (also known as an Eskimo Kiss), the toy comes to life and introduces himself as Blinky. She soon also meets his sister, Pinky, who just wants Blinky to go home with her to Koalawala land, though Blinky always refuses. Pinky can fly and summon magic portals using a tube of lipstick, leading to the trio going on many whacky adventures. Even Sandy's grandmother gets in on the act.

About halfway through the series, the show suddenly got more serious as Sandy visited Koalawala Land, the dimension where her friends and many other anthromorphic Australian creatures live and the show's plot grew so dark that by the end of the series, the fate of both worlds were at stake and the mystery of Sandy's grandfather's disappearance is the key to saving them. Oh, and the Koalas of Koalawala are basically human-hating Nazis that arrest and condemn humans to eternal imprisonment on sight.

Not to be confused with another series starring a koala named Blinky, although it could be argued that the name of the character in this series is a reference to that onenote , specifically the original books from the 1930s, as the animated series based on said books wouldn't come out until 1992.