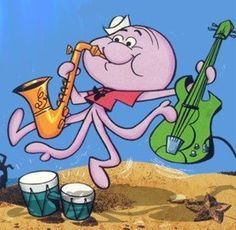 Octopoids and other tentacled creatures are often depicted as funny and amusing creatures.

Octopuses are soft and lack bones, which, along with their regenerative ability, makes them easy to be the victim of Amusing Injuries. Their Hollywood Chameleon ability can also make them a comical Master of Disguise. Plus there's the inherent funny-ness in the squishy, tentacled body that is able to contour and squeeze through narrow places.

Oh, and they have eight or ten arms (except when they are drawn with fewer), perfect for Multi-Armed Multitasking. Comedy gold.

Heck, even "octopus" and "squid" themselves can be seen as Inherently Funny Words.

May overlap with Stealthy Cephalopod if an octopus' camouflage abilities are played for laughs. For tropes about other comical animals, see Beary Funny and Clucking Funny. Contrast Tentacled Terror for cephalopods being depicted as scary and monstrous.