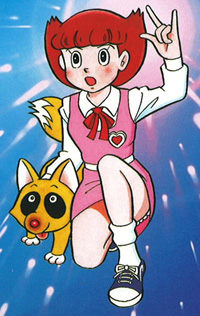 Esper Mami is a manga and anime from The '80s, about Mami Sakura, an Ordinary Junior High Student who one day manifests supernatural powers, including teleportation, telepathy, and telekinesis. Using these powers, and with the help of her best friend Kazuo Takahata, Mami solves mysteries and helps people in trouble.

Created by Fujiko F. Fujio of Doraemon fame. This series has a similar premise to one of FFF's previous shorts titled Akage no Anko ("Redheaded Anko"), later retitled Anko Ooi ni Okoru ("When Anko Really Gets Angry"), which is about Anko, a teenage girl who discovers her psychic powers and the dark secret of her mother's lineage, and who also poses nude for her own father.

The anime was released in France under the name "Malicieuse Kiki" with no changes except the characters' names.