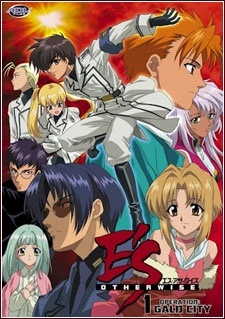 They are gifted, they are cursed.
Trained by a company to battle a resistance.
They have the power to save, and the power to kill.
Advertisement:

E's Otherwise (エス・アザーワイズ) focuses on Kai Kudou, an "Esper", who is recruited by an organization called Ashurum to become a soldier to purportedly save other psychics from regular humans. After a mission in Gald goes wrong, Kai finds himself living with a man named Yuuki and his adopted sister Asuka. As he learns more about Ashurum, Kai finds himself wondering what their true goals are, and worrying about his ill sister, who is under Ashurum's care.

The anime is based off the manga E's.