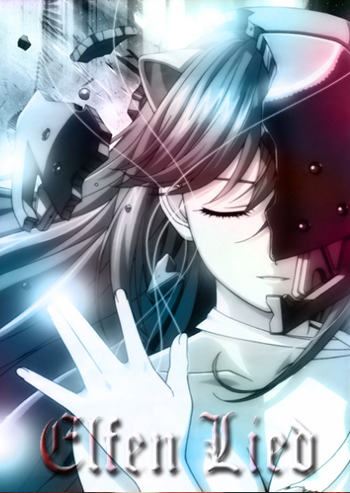 Reason #12007 not to trust a series by its cover.
"When you're miserable, you need someone more miserable than yourself."
— Lucy
Advertisement:

Elfen Lied (pronounced Elfen Leet, not Elfen "Lied"), written and drawn by Lynn Okamoto and serialized in Weekly Young Jump from 2002 to 2005, is a gornographic manga, which has been likened to a combination of X-Men, Carrie, Dr. Jekyll and Mr. Hyde, Friday the 13th, Love Hina, Devilman, Monster, Alien and Predator. In other words, it's a twisted mixture of mutant battles, Psychic Powers, split personalities, pseudo-harem antics, cute girls, the male lead who discovers that the person whom he interacted during that person's childhood is evil, and of course, bucketloads of Gorn - and it's more than happy to swing between comedy and horror at the drop of a hat. It has also been compared to I Dream of Jeannie as done by David Lynch and Wes Craven. There is also a 13-episode anime series of the same name that first aired in 2004, which follows the first couple of chapters but ends with an alternative ending before the real plot kicks off.

The series' title is German for "Elves' Song" or more formally "song of the elves'" and takes its name from the poem "Elfenlied", which is featured twice in the story.

Lucy, a beautiful but lethal Diclonius, escapes from a sinister research facility, brutally slaughtering anyone that gets in her way, whether they intended to or not. However, a glancing headshot from an anti-tank rifle leaves her injured, and she falls into the ocean, unconscious...

Later, university student Kouta and his female cousin Yuka are walking along the Yuigahama beach near Kamakura, when they find a naked young woman with horns on her head. They end up taking her home and calling her Nyu after the only sound she makes.

Between the sinister government agency running the facility, Yuka's jealousy, Nyu's dark and troubled alternate personality Lucy and a traumatic past he cannot remember, Kouta is in deep trouble. Caught between monsters, both human and not, where does his loyalty lie?

The series has become something of a Cult Classic: given the heavy amounts of bloody violence and nudity, not to mention the dark tone overall (which are even worse in the manga), even in Japan the series only aired on satellite TV, as a glorified commercial for the DVD release. In North America, ADV Films didn't seriously think the show would gain widespread popularity, if only for the pragmatic reason that it was limited to mature audiences and could only be marketed to such. There was actually supposed to be a second season, but the show had to end after only one season largely due to lack of exposure in Japan from its limited TV run. Then, purely by word of mouth, it became one of ADV's top-selling North American DVDs of 2005.

Dark Horse Comics licensed the official English translation of the manga, releasing its twelve volumes in four 3-in-1 omnibuses, the first coming out in May 2019.