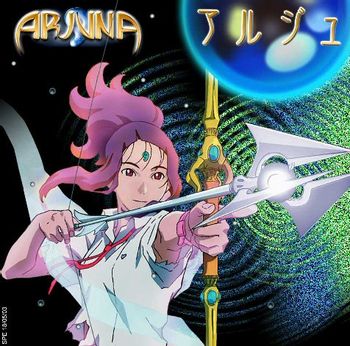 Why do you have to kill?
Advertisement:

Earth Maiden Arjuna is an Anime written and directed by Shoji Kawamori and produced by Satelight and Bandai Visual. With a total of twelve episodes with an original run between January 9, 2001 - March 27, 2001 on TV Tokyo. One additional episode was included on the DVD but was included in subsequent reruns.

The story follows Juna Ariyoshi, a Japanese high school girl chosen to be the Avatar of Time and entrusted with saving the dying Earth. Opening with her trip to the beach where an accident results in her death. As Juna's spirit leaves her body, Juna sees the dying Earth, the planet's suffering is visualized by worm-like creatures, the Raaja. A young boy named Chris appears before Juna and offers to save her life if she will help the planet, she agrees and is resurrected. The series chronicles Juna's attempts to save the planet with help from international organization SEED.

Think Captain Planet and the Planeteers crossed with an existential discourse on human's role in nature note  the combination of which makes for some very interesting viewing, An Inconvenient Truth and a lot of angst and Taoism. See also Blue Gender for a similar series, but in the mecha genre.