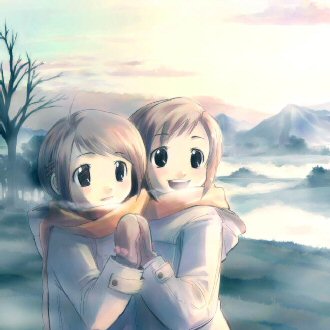 Tsubasa, Hikaru, and Hokkaido
"Do you like yourself right now?"
Advertisement:

Figure 17 Tsubasa & Hikaru is about a shy, introverted little girl named Tsubasa, taken out to the Hokkaido countryside by her father as he pursues his dream of becoming a baker. When, one night, she stumbles upon a crashed spacecraft — and then the pilot in a losing fight against its monstrous cargo - she herself is very nearly killed, saved only by a random accident involving the ship's emergency "Figure", a kind of biomechanical battle suit. Due to said accident, however, when the suit separates from her again it cannot return to storage, and instead copies Tsubasa's form. Tsubasa suddenly finds herself with a twin sister.

Figure 17 is an unusual anime, not least in that it seems impossible to fit into a genre. It combines elements of Slice of Life, with Magical Girl, Sci-Fi, Drama... Also, the creators chose to use thirteen 45-minutes episodes, originally aired once a month, rather than the more standard twenty-six 25-minute episodes once a week. This leads to much gentler pacing, the anime taking time to very deliberately explore its characters, not to mention animation quality one would normally expect to find only in an OVA.

While there are significant action elements, particularly in the battles against the Maguar, the story is really about Tsubasa and Hikaru's life together, and the gift of their new relationship as sisters. A great deal of time is spent emphasising the characters' fragility, especially as children — something which adds a serious element of tension to anything dangerous, with the at times followed up implication that, being as these, again, are children, ill will very likely come of their having to participate in combat. Attention is often placed heavily on the child's perspective, too.

Beware of spoilers! Many of them relate to the last fourth of the series, particularly the Grand Finale.