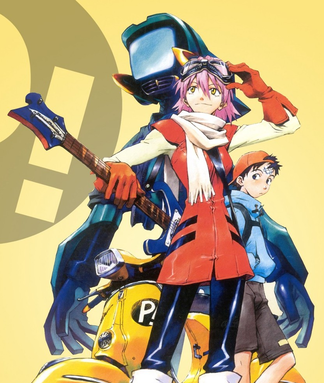 You will never see these characters appear so rational again.
"Nothing amazing happens here. Everything is ordinary."
— Naota, who really should have known better.
Advertisement:

FLCL (pronounced "Fooly Cooly"note (or "Flee Klee" if you're feeling silly), but never "Eff-ell-see-ell"), later given the retronym FLCL Classic after its sequels released, is a 6-episode OVA, released intermittently between 2000 and 2001.

It follows the story of Naota, a Japanese twelve-year-old who lives with his father and grandfather. Naota has become annoyed at the inappropriate attention from his brother's ex-girlfriend Mamimi, and he thinks his life and his hometown are boring. His entire life changes when Haruko Haruhara, a manic older girl, runs over Naota with her Vespa.

Haruko claims she's an intergalactic police officer, but she wields a Rickenbacker bass guitar with a chainsaw-like pullstring motor on the back as a blunt instrument and physically and sexually harasses Naota, making it clear something is weird about her. After his initial contact with Haruko, Naota's forehead begins spawning giant robots, and the insanity increases exponentially from there.

While FLCL's literal "plot" resembles something of a Space Opera, its real appeal lies in one of two places: as a Coming-of-Age Story filled with allegorical and symbolism-soaked writing, off-the-wall humor, and imagery that ranges from obvious to clever to brilliant... or as a bunch of insane almost-nonsense strung together to form a big ball of crazy that fascinates viewers as it offers loads of laughs and plays fast and loose with the fourth wall.

A manga version of the story was later released. Created by Hajime Ueda, the manga's story differs heavily from the anime as it goes on, sticking with a darker and less over-the-top tone (though it still has some comedic parts) while keeping the frenetic and confusing nature of the OVA.

, Studio Gainax announced that the property was for sale; Production I.G, a longtime Gainax partner and the other entity credited for FLCL's animation, subsequently purchased the rights. In March 2016 — six months after the purchase and over fifteen years after the original series ended — Adult Swim announced they would collaborate with Production I.G to create two new six-episode seasons for its Toonami block titled FLCL Progressive & Alternative. In March 2022, AS announced

that it was celebrating Toonami's 25th anniversary by ordering two new FLCL seasons, FLCL: Grunge and FLCL: Shoegaze. The first teaser for Grunge can be seen here