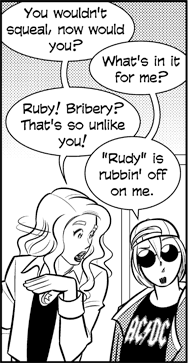 It's amazing what a reversed baseball cap and a stick-on beard will do for The Ingenue.
"No man, for any considerable period, can wear one face to himself, and another to the multitude, without finally getting bewildered as to which may be true.”
— The Scarlet Letter
Advertisement:

The Mole or the Con Man takes on a fake identity in order to gain something, be it information, money, a safe place or trust. As time progresses, he grows to love his new identity and the way people treat him. His new friends prove reliable and he is struck by the contrast. He might even fall in love with another person whom he is explicitly supposed to be taking advantage of. Either way, he wants to remain in his new identity forever.

Sometimes the friendship or relationship will dissolve when The Mole lets their true identity slip. For extra irony, have it happen in the process of confessing their love. ("You're so wonderful, I can't believe I was just seducing you to get the location of your secure base... whoops, Did I Just Say That Out Loud?") The usual response to The Reveal is "Was It All a Lie?" Occasionally, they will test the waters with a Trial Balloon Question.

A much darker subtrope is when the person is actually the The Mole in a villain group, but the temptation of The Dark Side gradually causes them to discard their initial good cause and become everything they originally despised. Or they grow to believe their own Masquerade a little too much and become a Stepford Smiler. Can be the result of a Secret Identity Identity crisis.

Contrast Beneath the Mask where the audience is only given a peek. Similar in style to Amnesiac Dissonance, but without amnesia. May involve Oblivious Guilt Slinging. Compare Secret Identity Identity, Fake–Real Turn, Romantic Fake–Real Turn and Going Native. If the character does not even respond to his old name anymore, that is That Man Is Dead. When a literal mask starts to change someone's personality, it's Evil Mask. Contrast Lost in Character, where a character who is a professional actor lives and breathes a role. Do not confuse with Becoming the Costume or Becoming the Boast. Some spoilers ahead. Has overlap with The Woman Wearing the Queenly Mask because the woman's true personality is often influenced or absorbed into the queenly persona, and consider as well To Know Him, I Must Become Him when people try to figure out someone by thinking like them. Compare and contrast Copied the Morals, Too, where some kind of magical or sci-fi copy of a hero turns out to also have the hero's moral code.

Not to be confused with what Jim Carrey did or the Trollhunters fanfic of the same name.

Masquerading as a young 8-Year Old Girl who was adopted by Kirito and Asuna, Yui sought to understand exactly what caused the two of them to grow through their sociopathy to start loving one-another as Husband and Wife... at least at first.

Masquerading as a young 8-Year Old Girl who was adopted by Kirito and Asuna, Yui sought to understand exactly what caused the two of them to grow through their sociopathy to start loving one-another as Husband and Wife... at least at first.