Webcomic / Who Made Me a Princess 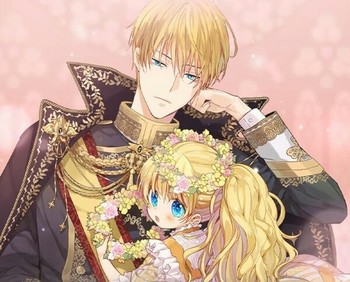 Aren't they adorable?!Note They are father and daughter by the way
Advertisement:

The beautiful Athanasia was killed at the hands of her own biological father, Claude de Alger Obelia, the cold-blooded emperor!

"It's just a silly bedtime story."

Until one normal orphaned woman wakes up to suddenly find she has transmigrated that tragic princess! She needs a plan to survive her doomed fate, and time is running out. Will she go with Plan A, live as quietly as possible without being noticed by the infamous emperor? Plan B, collect enough money to escape the palace? Or will she be stuck with plan C, sweet-talking her way into her father's good graces?!

Originally a web novel, Who Made Me A Princess, or alternatively known as Suddenly I Became A Princess, is a story written by Plutus and a manhwa is illustrated by Spoon. The Webnovel is completed and can be found at Kakaopage in Korean here

and the Webtoon can be found at TappyToon in English here

and Naver in Korean here

with an alternate link to Kakao here

The webtoon is officially completed at 125 episodes with side stories and epilogues to come.

This Webtoon contains examples of: