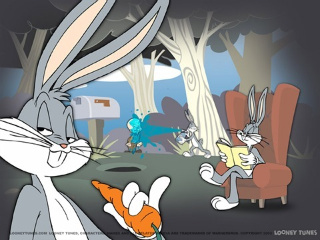 Eh... What's up, Doc?
"Some people call me cocky and brash, but actually I am just self-assured. I'm nonchalant, im­perturbable, contemplative. I play it cool, but I can get hot under the collar. And above all I'm a very 'aware' character. I'm well aware that I am appearing in an animated car­toon....And sometimes I chomp on my carrot for the same reason that a stand-up comic chomps on his cigar. It saves me from rushing from the last joke to the next one too fast. And I sometimes don't act, I react. And I always treat the contest with my pursuers as 'fun and games.' When momentarily I appear to be cornered or in dire danger and I scream, don't be consoined [sic] – it's actually a big put-on. Let's face it Doc. I've read the script and I al­ready know how it turns out."
— Bob Clampett, writing as Bugs.
Advertisement:

Bugs Bunny is the modern American trickster and easily the biggest star of the Looney Tunes and Merrie Melodies cartoons and their related works. The only rival of Mickey Mouse, he's inarguably one of the most famous cartoon characters in the world and an icon of The Golden Age of Animation. This character as a Funny Animal is found in many cultures' mythologies, including Reynard the Fox, Anansi the spider, Native American spirit Coyote, and Bugs' great-grandfather, Br'er Rabbit. Bugs is specifically a Karmic Trickster: harmless when left alone, but gleefully ready to dish out poetic justice whenever he perceives the need. There is an element of education in his revenge.

Like many of his peers, Bugs' origins are unclear. Before him, The Marx Brothers were the premier American tricksters, and traces of their influence can be found in many of his best known mannerisms. (In fact, many people aren't aware that Bugs' saying, "Of course you realize, dis means war!" originated in films such as Duck Soup and A Night at the Opera.)

More directly, shy, timid prey unexpectedly turning on the pursuer was a common theme at the Warner Bros. animation studios in the early days — Daffy Duck made his debut in the same way. Director Ben "Bugs" Hardaway introduced the notion of this character as a "scwewy wabbit" in "Porky's Hare Hunt" (1938). His name derives either from Hardaway's — model sheets were said to have been tagged with "Bugs' Bunny" — or the contemporary Brooklyn slang "bugs", meaning "crazy". Or both.

After a few further early appearances where his design was modified (notably gaining grey fur in Hardaway's Hare-Um Scare-Um (1939)), it's generally accepted by all parties that the smart, suave, on-the-ball wabbit we know and love today took his full official form in Tex Avery's "A Wild Hare" (1940). Chuck Jones later made him more sympathetic by giving Bugs that iconic attitude of live-and-let-live, right up until he's pushed just that one step too far, and then, it's war — "at which point [he] retaliates in every way he can imagine, and he is a very imaginative rabbit."

The job of any trickster, but especially the American type, is to think the thoughts and do the things that they say can't be thought or done. He's most likely to be found disturbing the complacency of his culture, or deflating the pompousness of its symbols. Since Bugs is also a comedy hero, he has the added advantage of Plot Armor that could stop an armor-piercing round.

His influence on modern American culture, like that of all the Looney Tunes characters, has been far-reaching to the point of ubiquity. For obvious reasons, though, Bugs is the especial favourite, especially in the theatrical years, getting more shorts than any of his co-stars, with a impressive 168 titles under his beltnote  Not counting cameos and the four "proto-Bugs" cartoons. Naturally, he has spawned several imitators over the years, notably direct descendant Buster Bunny of Tiny Toon Adventures and Yakko, Wakko and Dot of Animaniacs — although these last three skew more heavily toward The Prankster.

In 2011, Bugs starred in The Looney Tunes Show, having given up his nomadic roots and rabbit holes in favor of an average suburb, shared with co-star Daffy Duck. In 2015, a new series starring Bugs—Wabbit: A Looney Tunes Production, later renamed New Looney Tunes—debuted on Cartoon Network. In 2020, a back-to-their-roots series, Looney Tunes Cartoons, debuted on HBO Max.

"Of course you realize this means tropes!":

Example of:
Saw a Woman in Half