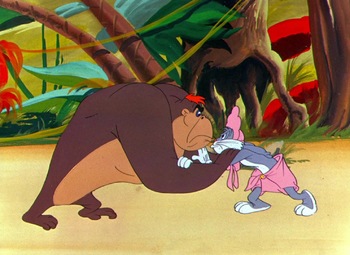 I throw myself upon your tender mercy....
Gorilla My Dreams is a 1948 Looney Tunes cartoon directed by Robert McKimson.
Advertisement:

Bugs Bunny is, for some reason, adrift in the ocean in a barrel (similar to how "Bugs Bunny Nips the Nips" started). He happens to wash up on the island of "Bingzi-Bangzi", which has a large population of very anthropomorphic gorillas. A lovesick female gorilla finds Bug and immediately adopts him as her baby. Bugs, who sympathizes with a crying woman, plays along. However, her husband "Gruesome" is not at all happy at adopting a rabbit, and tries to get rid of Bugs.

Remade in 1959 as "Apes of Wrath". Not to be confused with the Chip 'n Dale: Rescue Rangers, Captain Simian and the Space Monkeys, CatDog or The Super Mario Bros. Super Show! episodes of the same name.