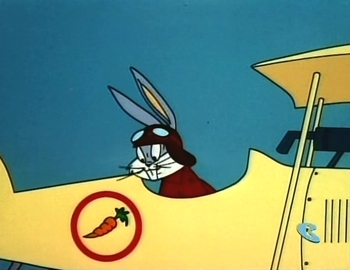 Set in 1917 during World War I, France's war HQ has selected Captain Smedley (Porky Pig) to rid the skies of Germany's feared Baron Sam Von Schpamm (Yosemite Sam). The next day, however, Smedley is knocked out by his comrade, Bugs, who takes his place because Smedley has a family. Bugs then flies over the lines and challenges the Baron, who immediately takes to the skies in retaliation. However, the Baron soon finds himself going through his entire supply of planes in his futile attempts to shoot down the wascally wabbit.

Not to be confused with the 1931 Warner Brothers cartoon of the same name, though it is the final classic era cartoon pairing Bugs and Sam.