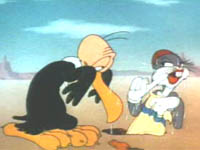 "Bugs Bunny Gets the Boid" is a 1942 Merrie Melodies cartoon, directed by Bob Clampett, and starring Bugs Bunny.

The short begins in a faraway wasteland, with a Mother Buzzard sending off her quadruplets to get some food for them—save one, the dimwitted Killer (aka. Beaky Buzzard), voiced by Kent Rogers. After being booted away from the nest, he treks off to bring home a rabbit for his ma—and promptly discovers a rabbit hole, housing the ever so nomadic Bugs Bunny. Bugs promply matches wits with the buzzard, resulting in much Hilarity Ensuing.

"Bugs Bunny Gets the Boid" provides examples of: