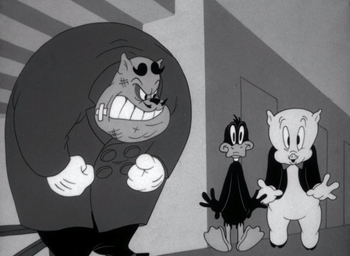 "Porky Pig's Feat" is a 1943 Looney Tunes short, directed by Frank Tashlin, his first short following his return to Termite Terrace in 1943, having left for a five-year stint at Disney and Screen Gems studios.

The cartoon centers around Porky Pig and Daffy Duck's attempts to escape the Broken Arms Hotel manager without paying their bill, Daffy having gambled away all their money in a game of craps. Despite numerous methods to elude the hotel manager (from using the elevator, sending the manager down a large spiral staircase, or going out of the window), he eventually gets the upper hand and locks them up in their hotel room until they pay up.

This is marked as the only cameo appearance from Bugs Bunny in a black and white Looney Tunes short.