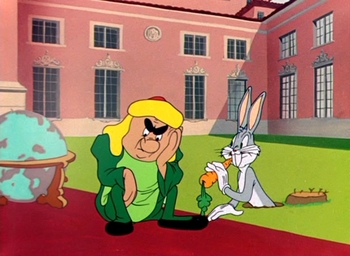 “What’sa up-a, doc-s?”
1492: The King of Spain and Christopher Columbus discuss the shape of the world.
Title In opening
Advertisement:

Hare We Go is a 1951 Merrie Melodies cartoon starring Bugs Bunny and directed by Robert McKimson.

Chris insists that the world is round, but the King keeps countering that it’s flat. Literally kicked out of the chateau, along with his precious globe, Chris encounters Bugs, who offers to help him in his attempt. With land nowhere in sight, Hilarity Ensues.