Western Animation / A Star Is Bored 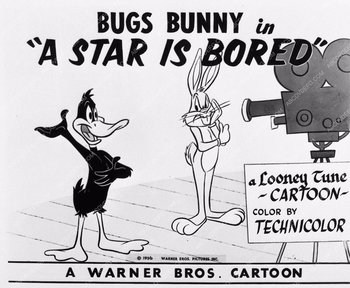 "A Star is Bored" is a 1956 Looney Tunes theatrical short directed by Friz Freleng, starring Bugs Bunny and Daffy Duck, with a few appearances by Yosemite Sam and Elmer Fudd.

Bugs is a movie star. Daffy, jealous of Bugs' success, decides to become a star himself. The movie producers grant Daffy's request — by having him perform as Bugs' stunt double.

Not to be confused with the 1962 Bugs Bunny Show episode of the same name, which incidentally featured this cartoon as part of that (the bridging sequences of which have been released as a bonus on the "Looney Tunes Golden Collection" line of DVDs).

The short was remade in the Seven Arts era as "Rodent To Stardom", with Daffy's then-regular co-star Speedy Gonzales taking Bugs' role.

"A Star is Bored" provides examples of: