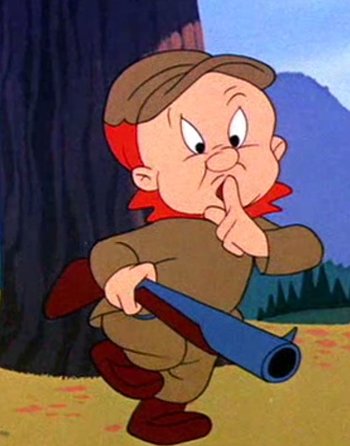 Elmer Fudd is a major character of the Looney Tunes franchise, and one of only three humans in the regular cast (the others being Yosemite Sam & Tweety's owner Granny).

The Butt-Monkey, often Too Dumb to Live. An avid hunter, thus Chuck Jones' favorite adversary for both Bugs Bunny & Daffy Duck, reaching a peak in the iconic "Hunting Trilogy". Less popular with the other directors, who found him too wimpy. He also had an earlier, less distinctive prototype named Egghead, who was sometimes referred to as Elmer.

Elmer Fudd was one of very few character in the classic Looney Tunes era that was not voiced by the immortal Mel Blanc. There were a few scattered exceptions, but for almost all of the character's appearances, he was voiced by an actor named Arthur Q. Bryan. After Bryan died in 1959, Hal Smith voiced Elmer in two shorts, but the character was soon retired. Mel Blanc did voice Elmer for a few later appearances after the Warner Brothers animation studio closed in 1969, but Blanc himself said he never got the voice right.

On a side note, he didn't appear as often as most people think—in fact, he only appeared in about 36 (out of 167) of the original Bugs Bunny cartoons, although he did star in many other character shorts, along with several of his own solo appearances, amounting to 62 classic shorts total (75 If you count the Egghead shorts).