Western Animation / A Day At The Zoo 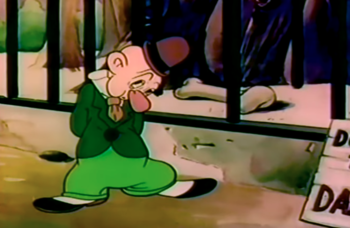 A Day At The Zoo is a 1939 Merrie Melodies cartoon, directed by Tex Avery.

The short (like most of Tex Avery's theatrical cartoon work both on WB and when we worked at MGM) is a series of visual and verbal gags, usually based on outrageous stereotypes, corny, yet clever wordplay; and topical references, is presented as a narrator (Gil Warren) describes a "tour" of the "Kalama Zoo" where the animals have nonsensical names, display anthropomorphic behavior, or illustrate punny gags. The only thing remotely related to a narrative is the running gag of Egghead (the prototype Elmer character) teasing a lion and paying for it in the end.