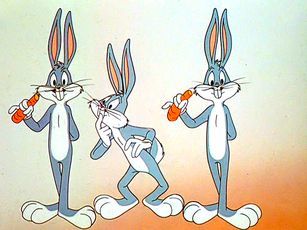 It's a successor to one of the most famous Warner Bros. cartoons ever made, Duck Amuck, though this time the protagonist/victim is Bugs Bunny: Bugs comes out of his rabbit hole, sees who the animator is (although the audience doesn't, like in Duck Amuck), and refuses to participate any further. The animator erases Bugs' rabbit hole as he tries to dive back into it, causing Bugs to slam right into the ground. Over the course of the cartoon the animator continues to screw with Bugs in various surreal ways, like in Duck Amuck, as Bugs grows angrier and more frustrated.

One of the very few cartoons in the Looney Tunes canon where Bugs is the butt of the joke; in fact, the previous cartoon, "Hare Brush", had Elmer Fudd making a fool of Bugs. On the whole, 1955 was a very strange year for Bugs

Was given a video game adaptation for the SNES in 1993 by Sunsoft.