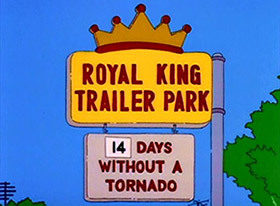 "We were in a mobile home, and I think God must really hate mobile homes, Andy, cuz tornadoes always attack them first. They get very mobile."
— Johnny Fever, WKRP in Cincinnati
Advertisement:

Tornadoes always seem to hit trailer parks. In Real Life, they're no more vulnerable to tornadoes than major cities, as the odds of a twister hitting any one particular area are relatively low. However, mobile homes are lightweight for buildings and not anchored to the ground, making them more vulnerable to a tornado's fury. (Some studies say that tornadoes tend to touch down just outside of cities because of the landscape change, and that's not an uncommon location for a trailer park, but they still don't specifically go after mobile homes.)

Thus, tornadoes that kill several people and make the news tend to hit trailer parks in the outer ring of exurbs. Twisters that wander harmlessly over empty fields or merely suck a farmhouse up into the sky are too common to be big news anywhere outside the immediate area. Also, in a major case of If It Bleeds, It Leads, news crews want scenes of utter devastation to report on, which the light, easy to pick-up-and-throw trailers provide, as opposed to normal houses which are anchored to the ground and can usually survive a much closer pass and thus do not provide a good image for TV.

Trashy Trailer Home is a Sister Trope, but generally, tornadoes will be only one of many reasons the trailer park is portrayed as an exaggeratedly horrible place to live.