Film / Night of the Twisters 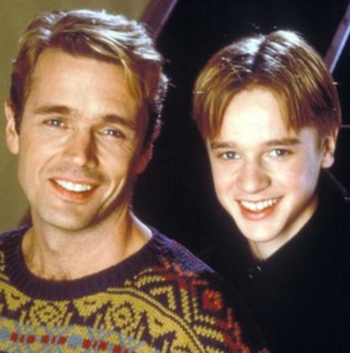 John Schneider and Devon Sawa
Night of the Twisters is a made-for-TV Disaster Movie that first aired on The Family Channel (now Freeform) in 1996, the first of many for the channel.

The movie is based on a novel by the same name by Ivy Ruckman, which in turn is loosely based on a real-life 1980 tornado outbreak in Grand Island, Nebraska. Much of the movie omits these facts and alters them.

The plot follows a teenage boy named Danny Hatch (Devon Sawa), who along with his mother (Lori Hallier), stepfather (John Schneider), baby brother, and his best friend Arthur (Amos Crawley) find themselves in the middle of a unusual violent tornado outbreak at an unusual time. While at home babysitting, Danny's stepfather leaves to check on their grandmother, and soon after, a monster tornado bears down on the home. After the tornado has passed them, Danny struggles to reunite his family as the night wears on and more tornadoes ravage the town.