Film / Night of the Templar 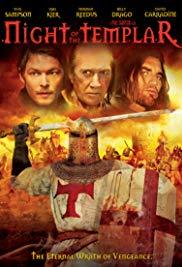 The Eternal Wrath of Vengeance!
Advertisement:

Lord Gregoire is a Knight Templar who just won a glorious battle. Unfortunately, that is the night his contemporaries elect to betray and murder him for immortality. Gregoire vows that he will return in ten lifetimes and claim them all. Now, in the modern day, Gregoire has possessed a descendant to slaughter the reincarnations of his nemeses.