Film / The Wizard of Oz 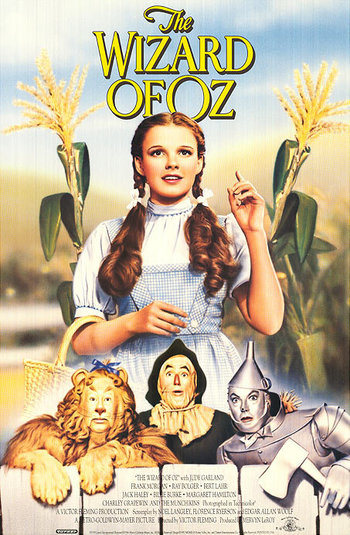 The Wizard Of Oz is a 1939 Metro-Goldwyn-Mayer film, and the most well-known screen adaptation of The Wonderful Wizard of Oz. The film was directed by Victor Fleming and starred Judy Garland, Ray Bolger, Jack Haley, Bert Lahr and Margaret Hamilton.

The film changed the silver shoes to ruby slippers (depending on this source, this was either to show off the new color technology of the time, because silver shoes were boring, or because silver shoes didn't show up well), merged the two good witches, cut out several incidents, including all of Dorothy's (admittedly anticlimactic) return to the Emerald City after killing the Witch and the journey from the Emerald City to Glinda's palace, and added the possible All Just a Dream ending—the studio heads thought the audience was too sophisticated to accept a "real" fantasyland.note In The Emerald City of Oz, just before Dorothy, Aunt Em, and Uncle Henry come to Oz once and for all, Aunt Em and Uncle Henry think that Dorothy's Oz adventures are mere dreams, as well. As it turns out, Oz really was a real place.

This movie has proven so popular that it has had several stage adaptations written and produced over the years. Professional productions have included a touring ice show in the 1990s, an All-Star Cast concert staging in New York City in 1995, another N.Y.C. production that ran seasonally at Madison Square Garden later in the decade, and a 2011 London production produced by Andrew Lloyd Webber that added several new songs by Lloyd Webber and Tim Rice. The 2011 Tom and Jerry Direct to Video movie Tom and Jerry and the Wizard of Oz is a Twice-Told Tale version, and got its own follow-up Tom and Jerry: Back to Oz in 2016. It was

even the basis for a professional wrestling gimmick.

Disney has made two films that effectively serve as (unofficial) bookends to this one. 1985's Return to Oz is a semi-sequel that's substantially Darker and Edgier, but also more faithful to the original Oz novels. 2013's Oz the Great and Powerful is a spiritual prequel to this film, an origin story following the Wizard (played by James Franco) as he first arrives in Oz.

While this version is by far the most well known, and much more well-known than the book it is based on, it is not the only, or even the first film adaptation. There were several silent adaptations, the oldest surviving of which is from 1910. That, curiously enough, was based on a 1902 stage musical. Although most of the music for the show has been lost, the producers of the 1939 version were aware of it, and that may have had an influence on their work. Adaptations were far rarer since then, and most since have been based on the film rather than the book.

As far as tropes go, this film has directly inspired Off to See the Wizard (for Stock Parodies of the film's plot) and Not in Kansas Anymore.

Not to be confused with the very different HBO drama Oz