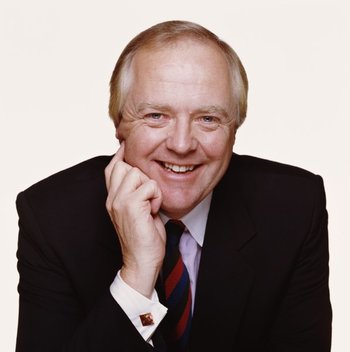 "I'm not the kind to be vindictive,
holding some childish grudge.
How could I be? I'm in the spotlight - half of the world, my judge.
All I demand is those I work for, those I give all my skills, all my time and pain,
those that I entertain,
give me the same compassion in return.
But the fools never learn."
— The American, Chess
Advertisement:

Not a composer, but his work falls into this category of the rest of a Theater creator, and plus, he deserves his own page. Sir Timothy Miles Bindon Rice (born 10 November 1944) is a lyricist/writer/broadcaster, closely associated with, and all too often overshadowed by, with Andrew Lloyd Webber (so much so, that his ex(ish) wife wrote a letter of complaint to the The Daily Telegraph to clarify that the whole concept of Evita was his idea although Lloyd-Webber is given all the credit) but also a critically acclaimed writer of musicals in his own right. He's also a big Cricket fan.

He has written the lyrics and book for these musicals.

He also did the lyrics for the new songs in the stage version and the live-action remake of Beauty and the Beast, as well as all the lyrics for Aida and The Lion King both on screen and stage.

A winner of three Oscars, all for Best Original Song, but shares them with Alan Menken, Elton John and Lloyd Webber respectively. Only the first one, "A Whole New World" falls squarely into Award Bait territory. "Can You Feel the Love Tonight" relies more on the cool chords, orchestrations and lyrics than any Ham and "You Must Love Me" has a depressing subject matter and a performer who doesn't have the voice for an Award-Bait Song anyway.

In 2018, Tim Rice joined The EGOTs, after NBC's Jesus Christ Superstar Live in Concert won an Emmy for Outstanding Variety Special (Live). A film adaptation of Aida was set to be released in 2010, but fell into Development Hell.