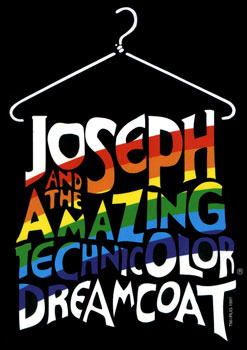 Way, way back many centuries ago, not long after The Bible began...
Advertisement:

It's part of the Book of Genesis... BUT WITH SINGING.

Really, Joseph and the Amazing Technicolor Dreamcoat (abbreviated as Joseph...Dreamcoat, Dreamcoat, J&tATD, etc. etc.) is simply that: Andrew Lloyd Webber's Breakthrough Hit, his first musical to be performed, with lyrics by his frequent collaborator Tim Rice, and based on the Biblical story of Joseph and his coat of many colors.

As a side note, this was the musical by which Donny Osmond, playing the titular Joseph, surpassed George Rose to take the World Record for Most Appearances as a Single Character in a Stage Production. Rose previously held the record for playing Major General Stanley in The Pirates of Penzance over 5200 times on stage; Osmond surpassed this mark, and eventually would go on to play Joseph in over 7000 presentations of the show, including a filmed version.

Was later followed up by Webber's other major biblical musical: Jesus Christ Superstar.