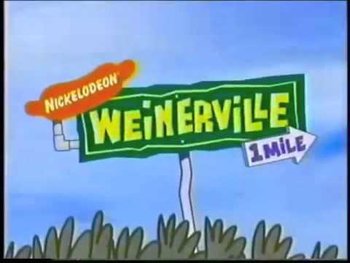 "Oh well, welcome to Weinerville! Ahhhh!"
—-Mayor Dottie, at the beginning of every episode

Nickelodeon Weinerville is an American television program on Nickelodeon that was produced in 1993 and 1994, aired in reruns until 1997. The show was based around a giant puppet stage which was designed to look like a city, called Weinerville. The show was hosted by Marc Weiner.

Marc Weiner teamed up with Nickelodeon with the premiere of Nickelodeon Weinerville, a half-hour variety show using classic elements of kids' programming, including puppeteering,animated shorts and interaction with a live studio audience, to entertain kids and their parents. Since its premiere, Weinerville has drawn the attention of such shows as Entertainment Tonight, Good Morning America and The Early Show for being television's first and only half-man/half-puppet variety show where kids are transformed into puppet citizens.

Another major factor of the show aside with the puppets was the fact that in between all the main segments with Weiner and his creations were animated shorts from a variety of sources shown to fill out time. The first season featured old Paramount and UPA cartoons including Mr. Magoo and Gerald McBoing-Boing shorts. In the second season segments from The Alvin Show were used. In later reruns, the shorts were shuffled, and in 1996 the Courageous Cat and Minute Mouse cartoons and Batfink shorts were exclusively shown.

The show premiered on July 11, 1993. During the first season, all episodes ran in a two-hour marathon every Sunday. However, Weinerville quickly gained popularity: in the middle of the first season Nickelodeon began running the show on weekday afternoons. For the second season, which premiered on May 2, 1994, the episodes aired daily. The show aired on Nickelodeon until June 30, 1997, although the Chanukah special reran on December 21, 1997.