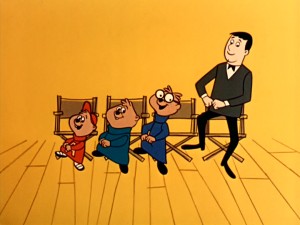 From left to right: Alvin, Theodore, Simon, and Dave.
Advertisement:

It follows the lives and shenanigans of the Chipmunks (in this series, they were further developed as a trio of rambunctious kids) as they often cause mischief towards their high-tempered human father figure and manager Dave Seville, who was based on the series' creator, Ross Bagdasarian, (Sr.)note Also known as "David Seville", a name he originally used when he recorded his hit song Witch Doctor, which the Chipmunks perform (with Dave) in one episode.. Bagdasarian provided the speaking and singing voiced the three rodents as well as voicing the hapless bachelor Dave.

Aside from the seven-minute Chipmunk segments, the show also had segments featuring the misadventures of bumbling inventor Clyde Crashcup voiced by Shepard Menken who essentially re-invented various items and took credit for dreaming it up in the first place. His “creations” often backfired on him until his silent hyper competent assistant Leonardo saves him from any further self-destruction.

Despite being drawn in color, the show was played in black-and-white format in primetime against the hit Wagon Train though it didn't fare well in prime time and was cancelled after the first season. However, the characters themselves proved to be enormously popular with young viewers — the show popped in in repeats on CBS Saturday morning in 1962, airing to widespread success for three seasons.

The series later was revived on NBC-TV, being promoted under the title Alvin and the Chipmunks Saturday morning between March 10, 1979 and September 1, 1979.

Viacom Enterprises distributed reruns of The Alvin Show to local stations to coincide with its successor, Alvin and the Chipmunks.

Nickelodeon picked up broadcast rights for the show in 1994 and ran the episodes daily until early 1995. During that time as well as sometime afterwards, the individual cartoons and musical segments were inserted into episodes of Weinerville. The show ultimately vanished from the airways.

NOTE: Tropes under here are specifically for the '60s cartoon series.

The Alvin Show provides examples of:

At the end, Crashcup throws Pictorial out of the house and promises the fourth wall, "I'll be back next week, a bachelor at work."

It probably would've worked if Theodore didn't have to be so polite...

It probably would've worked if Theodore didn't have to be so polite...