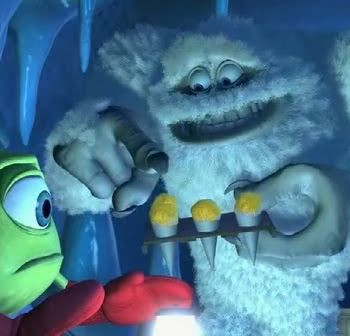 Uhhh... I'll pass.
Quagmire: Hey, maybe we could set [Peter] up with another lemon snowcone, huh?
Peter: No thanks. The last one you gave me didn't taste like lemon at all. It tasted like... [pause] Oh, you guys are asses.
— Family Guy, "A Very Special Family Guy Freakin' Christmas"
Advertisement:

When you see snow outside that's ominously yellow-colored. Or worse, when someone tries to feed you a "lemon" snowcone. Yeah, this is a Toilet Humour trope. Sometimes hilariously combined with a character's own moment of Fridge Horror when they realize what it actually is. Especially if they took a bite of it.

Due to this trope's inherently juvenile Vulgar Humor, it is unlikely to be appreciated by anyone older than 25. Or Frank Zappa.