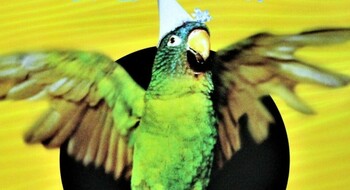 He talks everybody out.
"I'll have a starling shall be taught to speak
Nothing but 'Mortimer,' and give it him"
— Hotspur, Henry IV

Possibly the most common type of Intellectual Animal is a talking bird, and you know you've seen it already. Parrots, ravens, mynah birds (Asian starlings, in a nutshell) and other birds capable of mimicking human speech are likely to be outright fully intelligent and articulate. Most common in settings where there is an element of the fantastic that can be used to Hand Wave the inaccuracy, but even fairly mundane, realistic stories sometimes do it. Someone who Speaks Fluent Animal is not needed here (but may show up nonetheless).

Be careful if you're talking about something you want to keep a secret — Not in Front of the Parrot!

See also Idiot Crows. Not to be confused with the other definition of "mouthy", in that case see Mouthy Bird for birds with expressive mouths.