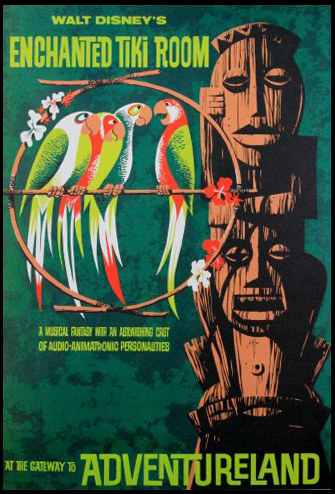 ♫ All the birds sing words
And the flowers croon
In the tiki, tiki, tiki, tiki, tiki room ♫
"Wahine me keonimana, Ladies and Gentlemen, come with us to a world of joyous songs and wondrous miracles: Walt Disney’s Enchanted Tiki Room!"
Advertisement:

The Enchanted Tiki Room is a theater-in-the-round attraction shown in different forms at various Disney Parks. While there are major differences between each version of the pseudo-Polynesian Adventureland show, the core concept remains mostly the same; guests are welcomed into a magical tiki hut that comes to life with over 150 singing birds, flowers, and tikis all around them, with a fountain in the center of the room.

There is an Enchanted Tiki Room at the following parks, with each version they've received covered: 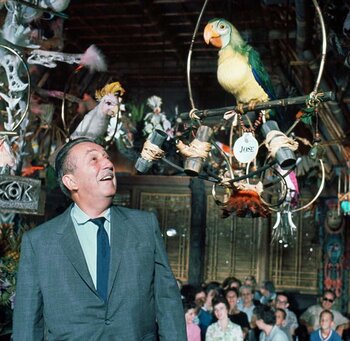 Walt Disney with José in the Tiki Room.
The original Walt Disney's Enchanted Tiki Room has been a mainstay at Disneyland Park since June 23, 1963. The only version of the attraction that Walt Disney himself has touched, the ride was the first one to use Disney's patented Audio-Animatronics technology. The show features four host macaws known as the Tiki Birds, each with various stereotypical accents; Mexican-accented José (voiced by Wally Boag), Irish brogue-speaking Michael (Fulton Burley), French-accented Pierre (Ernie Newton in the original, Jerry Orbach in WDW's Under New Management mentioned below), and German-accented Fritz (Thurl Ravenscroft). The Tiki Birds and the Tiki Room itself entertain guests with a musical show featuring songs such as "The Tiki Tiki Tiki Room" by The Sherman Brothers, "Let's All Sing Like the Birdies Sing", and the "Hawaiian War Chant".
Magic Kingdom 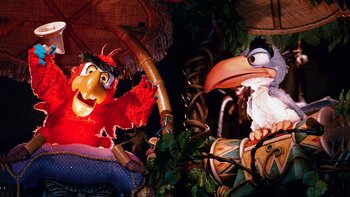 The Tiki Room's new managers, Iago and Zazu.
Walt Disney World's initial version of the attraction was called Tropical Serenade, which was virtually identical to Walt Disney's Enchanted Tiki Room save for a different pre-show. It opened with the park until September 1, 1997, when Disney made the controversial decision to update the attraction for modern times. This updated version, The Enchanted Tiki Room (Under New Management), opened on April 5, 1998, and featured two famous birds from Disney's animated films; Iago the parrot from Aladdin and Zazu the hornbill from The Lion King.

In this version, the show starts off normally, but it gets interrupted by Iago (voiced by Gilbert Gottfried), who complains about how "outdated" the show is and tries to modernize it saying (or singing to the tune of "Friend Like Me"), "It's a whole new world so you better get hip, or your audience will disappear." Zazu (voiced by Michael Gough) and the four Tiki Room birds plead for Iago not to do so, but the parrot doesn't care. However, his insensitive attitude in the Tiki Room angers the Tiki Gods, and the "Tiki Goddess of Disaster" Uh-Oa (voiced by Armelia McQueen) punishes him, sending him from his perch up out of the Tiki Room. After Zazu then has the Tiki Gods themselves perform, a burnt and beat-up Iago reappears in a compartment on the wall, calling the Tiki Gods the greatest act he's ever heard and they're going to get rich from this show. After he gets the audience on their feet, the Tiki Birds perform a "magic trick" and make the audience "disappear" (get them to leave the theater).

Under New Management ran until January 12, 2011, when a small fire broke out in the ride's attic, supposedly severely damaging the Iago figure (the first one that interrupts the show). Disney closed down the attraction and used the opportunity to re-open an edited version of the original Walt Disney's Enchanted Tiki Room—this time without the Tropical Serenade name—on August 15, 2011 and continues to operate that version to this day.
Advertisement:
Tokyo Disneyland 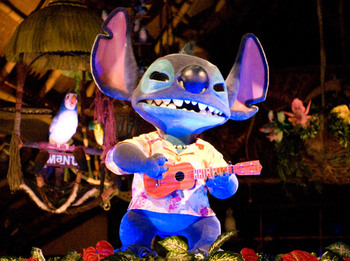 Stitch, the "Big Kahuna" himself.
Japan's version was initially a clone of the original that opened with the park on April 15, 1983. It ran until 1999 when it was closed at later replaced by The Enchanted Tiki Room: Now Playing Get the Fever!, a show that replaced the old format entirely, with four new host birds (Danno, Scats, Buddy and the first female host bird, Lava) and a wild Vegas-style nightclub feel. While it did not run in English, an English demo track was recorded. You can see a fan's recording of the show with the English demo track dubbed over in two parts here

Get the Fever! ran until January 2008 when it was replaced by The Enchanted Tiki Room: Stitch Presents Aloha e Komo Mai! on July 25 that year, featuring the mischievous blue alien from the Lilo & Stitch franchise (voiced by Kōichi Yamadera). Notably, this version is the only one to not feature the iconic theme "The Tiki Tiki Tiki Room" at all (although part of the "Hawaiian War Chant" is used here). There's no English version of the show, but you can watch a Fan Sub of it here.

Instead of the Tiki Birds, we are introduced to the four "Birds of Paradise", Hanoli, Manu, Mahina, and Waha Nui, who then sing "Hawaiian Roller Coaster Ride" from the original Lilo & Stitch film. The lights go out midway, interrupting the song, and the Tiki Room is graffitied with pictures and messages. The birds believe that one of the drawings is of the leader of the Enchanted Tiki, Big Kahuna, who they worry that he will doom them if he's angered. They then notice that the messages also say "Aloha e komo mai" (Hawaiian for "Hello, welcome") and then sing "Aloha, E Komo Mai", the theme song of Lilo & Stitch: The Series. As the show goes on, however, the birds deal with further interruptions, including someone blasting air horns from the flower beds, putting plastic Stitch ears on the birds of the Birdmobile, and painting said Birdmobile birds blue. Then the lights go out again, and a figure purporting himself to be the Big Kahuna appears from the fountain. After a few moments, he reveals himself to actually be Stitch, who says he did those interruptions throughout the show so he could be in it, but the Birds of Paradise scold him saying he should've asked before the show began. They do let Stitch perform, however, provided he stops causing trouble, and after Stitch and the Birds of Paradise performs a reprise of "Aloha, E Komo Mai", he declares everyone in the Tiki Room to be ʻohana.

Now Playing: Get the Fever!:

Heigh-ho! Heigh-ho!
It's out the door you go!