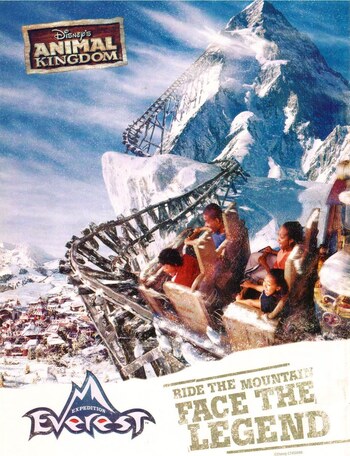 Legend of the forbidden mountain
In the shadows of Mount Everest, a train awaits. But be warned, those attempting to reach the summit must face...him.
—Commerical for the ride

Located in the Asian section of the park (which represents the fictional country of Anandupar), visitors are on an expedition to the base of Mount Everest, boarding trains previously used for transporting tea and travel over the Forbidden Mountain to do so. However, these activities have gotten the attention of the mountain's guardian, the Yeti of Tibetan legend, and it won't let humanity desecrate its land so easily, leading riders to encounter it.

The ride was announced during Disney's Animal Kingdom's 5th anniversary event on April 22, 2003 and would have its soft opening on January 26, 2006, before opening to the public on April 7, 2006. The ride would become immensely successful and would give Animal Kingdom the boost in popularity it so desperately needed after its rough first few years following its opening.