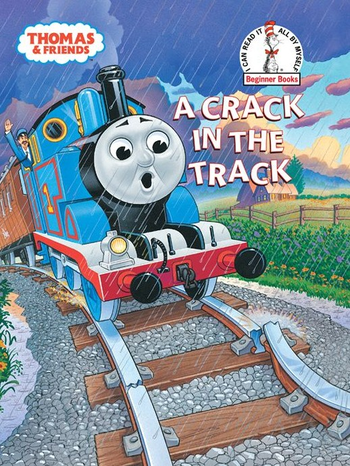 "His driver applied the brakes, but it was too late..."
"What bridge?"
— Tonto,The Lone Ranger
Advertisement:

If the track on which a train is supposed to run has been damaged or obstructed, any train running across it will be at best halted and at worst completely destroyed. Sometimes this happens by accident — a storm, flood, or other disaster might wash away a bridge or knock a tree across the line. Other times, there's a nefarious scheme at work — some villain sabotages the rails so as to wreck the next train that passes (or, in a downplayed version, simply to force it to stop). Either way, it has the potential to lead to a disaster, and makes our heroes' train trip more hazardous than they would like.

Often, the problem will not be noticed by the people on the train until too late — in order to save the day, it will be necessary to warn the driver somehow. The situation can be exacerbated if you've got a Runaway Train, since the train can't stop even if the danger is known. This is one of the main reasons Train Stopping by passing heroes is necessary.

A version of this will often feature in a Rollercoaster Mine. It can be part of a Train Job plot, and may be the cause of a Big Disaster Plot.

This is, of course, Truth in Television. Wikipedia has an exhaustive list of train accidents

, many of which were caused by this.

Contrast Railroad Tracks of Doom and Chained to a Railway, where there's something on the track but the danger is not to the train. Not to be confused with departures from metaphorical rails (such as Derailed Train of Thought, Off the Rails, or Translation Train Wreck). Also not to be confused with a trouble in the soundtrack. Or a race track trouble.