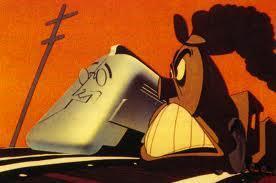 Hell Bent for Election is a 1944 FDR-approved campaign film commissioned by United Auto Workers, inspiring viewers to register and vote for Franklin D. Roosevelt, who was the democratic candidate at the time of the 1944 presidential elections. The film was UPA’s (which at the time was Industrial Film and Poster Service) first ever animated movie. The director was none other than Chuck Jones, moonlighting from his regular job at Warner Bros.

The plot revolves around two trains headed to Washington, both are nearing “Track 44” (metaphor for 1944), and only one train can cross it. A stationmaster named “Sam” tells “Joe” that he needs to sidetrack the “Defeatist Limited”. The Defeatist Limited represents Roosevelt’s opponent, Dewey Thomas. The train’s lackey, “Horace Moneybags”, who resembles Dewey Thomas but as a gnome and large-toothed tries to get Joe to not switch the track by whacking his head and making him smoke until he passes out. Joe then has a dream about Dewey passing the “Win-The-War Special”, he eventually snaps out of his dream, switches the tracks, and the Defeatist Limited crashes, letting Roosevelt head to Washington.