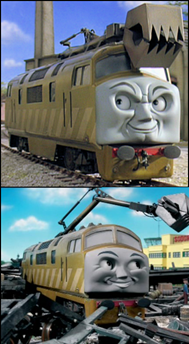 This engine derailed in a whole new way. note Top: 2000, Bottom: 2005. No official Heel–Face Turn took place.
"Pardon me, but do you mind if we assassinate your character just a little bit?"
— The Agony Booth, Star Trek VI: The Undiscovered Country
Advertisement:

When an established character becomes largely different, exhibiting behavior contrary to what has been previously shown. This is not a matter of organic growth. Rather than gradually changing in response to events and experiences, a derailed character will exhibit shockingly unusual behavior that implies malfeasance or incompetence on the part of the writers.

Note that organic growth does not necessarily mean 'benign growth', and it is perfectly possible for a previously good-natured character to end up embittered or depressed without falling victim to this trope. This is rare however, and often unpopular.

In published fiction, derailment is usually caused by an author having a certain story idea and needing to stretch the characters' personality to fit. In the worst cases, the author may end up speaking for the character. In works with multiple authors, a new author may have a wildly different interpretation of a character, causing him to write his version of the character instead of the one established by canon.

Fans motivated by Die for Our Ship will use Character Derailment in their fanfics to remove the character from the Official Couple which is in the way of their OTP (or just because they dislike them).

In the rarest of cases, this can be an example of how Tropes Are Not Bad. Previously boring or irritating characters may actually be improved if they're drastically changed. A classic example is Kelly Bundy from Married... with Children, whose transformation into The Brainless Beauty also coincided with the show's Growing the Beard.

Please check if examples fit better into subtropes before adding them here.

If in Fan Fics, it can involve Canon Defilement, Draco in Leather Pants or Ron the Death Eater (or some combination of the three). When the derailed character's characterization is fixed, it is Character Rerailment. Contrast Characterization Marches On (where a character changes because their previous characterization was only a "work in progress"), Ultimate Universe (where changing the characters is the very premise of the work to begin with, and do not count as examples, unless of course the example is about changes within the ultimate universe itself) and see also Character Check (where a derailed character might briefly act like they used to).

Compare Characterization Marches On for when they had yet to establish a consistent character to derail. Not to be confused with Adaptation Personality Change.

No Real Life Examples, Please! You might be looking for Star-Derailing Role in such case.