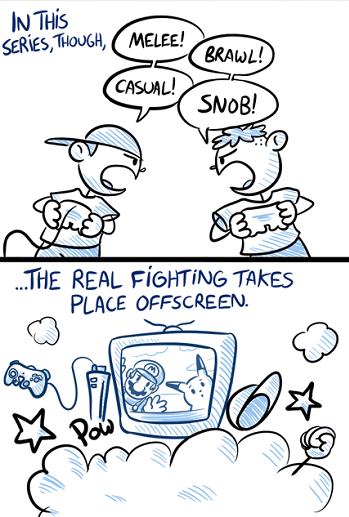 Karen: Strong Pokémon. Weak Pokémon. That is only the selfish perception of people. Truly skilled trainers should try to win with their favorites.
Gentleman: It's one thing to enjoy leisurely battles, but real battles can be a severe trial. Truly strong Trainers sometimes must be prepared to choose Pokémon that can win rather than their favorite Pokémon.
— Pokémon Gold and Silver and Pokémon Omega Ruby and Alpha Sapphire, respectively, demonstrating both sides
Advertisement:

The endless debates between Tournament Play and Casual Play, particularly in the Fighting Game Community (though it can and does spread to other genres), guaranteed to split apart every game fandom in existence. A large cause of Flame Wars and, unfortunately, death threats by a Vocal Minority.

The Hardcore player is the Spirited Competitor — plays for the sake of a challenge and finds deeper immersion how far they can hone their skill. The Casual player is the Cavalier Competitor — treats it like the game it is, not investing themselves too deeply in it and not devoting huge amounts of time into it.

There are some valid reasons to get upset about a game pandering to one end or another, despite it often going too far. Tournament Play thriving can cause a massive gap between player skill levels depending on how much time one is willing and able to spend, which can alienate a lot of players. There are also the subsets of "Stop Having Fun" Guys and Scrubs, who attack players even on their side of the debate if they don't choose the highest-tiered legal settings. However, Casual Play is also dangerous because gross imbalances are ignored due to the assertion that Character Tiers don't exist and pandering to this area leads to shallow gameplay that stagnates quickly and the game having an overall shorter shelf life.

This can also spread into games which has story/backstory in them, including Licensed Games based on a well-established non-video game franchise, creating tension between those who play it for the game and those who play it for the world. Star Trek Online, for example, has arguments between hard-core trekkies who wish the Starfleet missions featured more diplomacy and exploration and less pew-pew, and gamers who point out that it's hard to make that kind of game in an MMO environment.

Note that this doesn't just apply to video games — anything with both a casual and competitive scene, such as sports or tabletop games, can also spiral into this debate.

Debates on this topic can get ugly, fast, especially in cases where the creator of the game takes sides. On This Very Wiki, many pages (especially in the YMMV tab) have to be policed closely because those joining the debate on either side tend to degenerate in the 1% who'd love to start a fight.

Compare The Great Player Versus Player Debate, which is this spread into MMORPG paradigms; the Console Wars, which usually overlaps in the form of "Casual Nintendo vs. Competitive Everyone Else"; and Technician Versus Performer, a conflict over similar reasons. For other, sometimes more nuanced divisions, especially those showing up in roleplaying and adventure games, see Player Archetypes.

Note: Whether or not these viewpoints are Hardcore or Casual tends to polarize on a case-by-case basis due to the ambiguous definition of "cheap."
Community Division

Note: It's debatable whether this affects either side at all. Typically, it relies on different definitions of "Hardcore" and "Casual", although it's still often dragged into debates on the topic.

A. The contrast in general: