Warning: This page assumes you have played Mass Effect and Mass Effect 2 (DLC included). Spoilers for those two games will be unmarked. 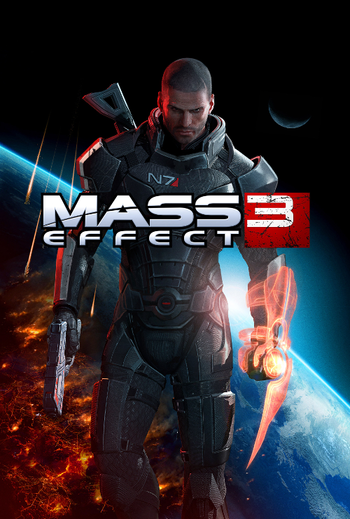 Take. Earth. Back.
"It's hard enough fighting a war. But it's worse knowing no matter how hard you try... you can't save them all."
— Commander Shepard
Advertisement:

The third in the Mass Effect series from BioWare, the esteemed creators of the Dragon Age and Knights of the Old Republic series, and the final game starring Commander Shepard. Several months after the second game, the Systems Alliance has had Shepard brought to Earth and relieved from duty for his/her actions, either for destroying a batarian relay to delay the Reapers or just for working with Cerberus, depending on whether the player completed the "Arrival" DLC in Mass Effect 2. Soon after, though, the Reaper fleet finally arrives in the Milky Way and attacks Earth, leaving millions dead and the Alliance military on the run. After escaping the devastation, Shepard is reinstated and embarks on one last mission: unite the other races of the galaxy, build a fleet capable of rescuing the human race from the Reapers, and launch a final battle for the fate of all sentient life.

Like the second game, Mass Effect 3 allows players to import their save files from the other two installments, altering the storyline to match the choices your Shepard made in Mass Effect and 2. Mass Effect 3's plot varies drastically depending on the save file; over one thousand variables are recorded in each save, and every decision made can have an impact on the story. Even choices made in the original game that were never addressed in the second. Many story tropes may never come into play for a given playthrough.

In terms of gameplay, combat is based on the Mass Effect 2 system, but with new additions, most prominently the ability to roll even when out of cover. Shepard also has a new heavy melee attack; the specific strike this varies depending on class, but most of them use a device known as an omniblade. Combat will be more difficult than the other games, as enemies will now adopt roles like "cover buster" or "suppressor" to force players to occasionally lose health. All types of weapons can now be carried by any player, regardless of class, but a "weapon weight" system has been instituted to preserve the balance between weapons and powers. The number and size of the weapons you carry will affect your power cooldowns, with certain classes getting improved weight for certain guns.

Two elements from the original Mass Effect, grenades and weapon modifications, return to the series with a slight redesign. Grenades are now a class-specific power, and they are thrown like traditional grenades instead of frisbees. As for mods, Mass Effect 3 returns to a gun accessories setup, instead of the second game's universal upgrade system; mods you buy or find need to be added at "weapon benches" after you acquire them. Weapons' appearances change depending on the selected mods.

The power tree from the second game has also been modified: now, instead of evolving a power only once at the end of its life, there are more chances to evolve and more types of evolutions, and certain aspects of powers can now be upgraded directly.

With this game, BioWare has added an entirely new element known as Galaxy at War. Players can unlock alternate ways to increase Shepard's "galactic readiness level" (the amount of troops, ships and resources Shepard can use against the Reapers). By playing different gameplay modes outside the main single-player campaign. The main addition is 4-player co-op; in this mode, none of the protagonists of the series appear, so players will have to create their own original characters and fight to liberate key positions from Reaper control. However, while using Galaxy at War can increase the chances of saving the galaxy in the single-player story, participation in it is entirely optional and after the Extended Cut download all endings are available as long as the right choices were made in the campaign. Galaxy at War was removed from the Legendary Edition as the remake did not include the multiplayer mode necessary for it to function.

The game was released on March 6, 2012 in North America and on March 9, 2012 in Europe. After an unprecedented fan outcry over the original endings, BioWare released the Extended Cut DLC on June 26, 2012, a free DLC pack that added some scenes to further explain each ending and resolve several unanswered questions.

Mass Effect 3 has had three other major packs of post-launch DLC expanding its single-player content. The first pack, Leviathan

, was released on November 27, 2012 everywhere. The final pack, Citadel

, was released on March 5, 2013 everywhere, almost exactly one year after Mass Effect 3 was released, and is one large continuity-infested trip down memory lane for Shepard and their crew from all three games. Unofficially, in 2016, fans released the Expanded Galaxy Mod for the PC version of the game.

The Xbox 360 version includes an exclusive voice command feature; players with Kinect can issue verbal orders to squadmates during combat and read an option from the Dialogue Tree aloud to select it during conversations.

for the Nintendo Wii U.

Master Thief with a self-proclaimed penchant for kleptomania Kasumi goes through Shepard's Drawers, to the Commander's annoyance. (From FluffyLlamaNinja)

Master Thief with a self-proclaimed penchant for kleptomania Kasumi goes through Shepard's Drawers, to the Commander's annoyance. (From FluffyLlamaNinja)