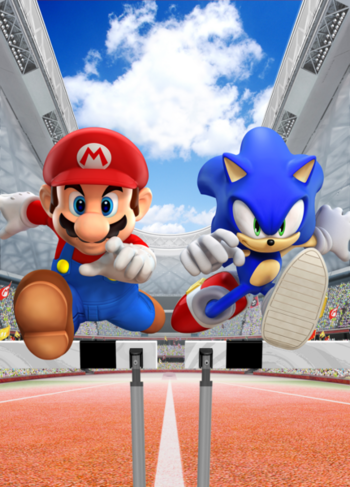 A crossover sixteen years in the making.
"The mustachioed one led the mission to rescue the princess. The one in blue may wish to see the crown jewels. He's an avid ring collector. And he may suddenly curl into a ball. Perfectly normal."
— Commercial

for Mario & Sonic at the London 2012 Olympic Games
Advertisement:

The 16-bit era of the early 1990s was one of the bitterest of the Console Wars, and the Super Mario Bros. and Sonic the Hedgehog series were two of the strongest weapons for the Fanboys. Thus when Sega left the hardware business, it was a huge shock that they also announced they were going third party, and thus their games would be on Nintendo systems in addition to the others.

A crossover was the next logical step. Then Sega got the license for the Olympic Games, Nintendo jumped in to get a piece of the tasty, tasty, athletic action, and that was where they decided the first crossover would be, so the casts of the respective series were slapped together to compete in various events.

The games in the series:

See also the Super Smash Bros. series, another crossover involving both Mario and Sonicnote notably, Sonic's debut in the series in Super Smash Bros. Brawl came at around the same time as the first game in the Olympic series, which meant double the hype at the time; and amiibo, Nintendo's toyline which Rio 2016 supports. Not to be confused with a side series of serious, down-to-earth Olympic video games also developed by Sega.