Characters / Mario and Sonic at the Olympic Games 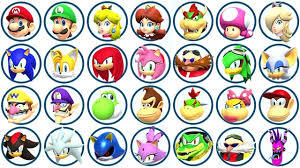 Mario and Sonic at the Olympic Games is a crossover series between the Super Mario Bros. and Sonic the Hedgehog series. As this character list is about this series in particular, one should go see the respective franchises' Character Sheets for much more detailed info about these characters. 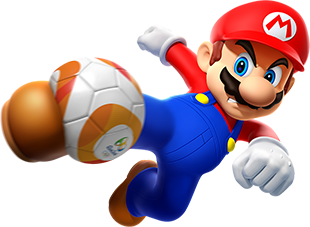 Nintendo's world-famous mascot and the captain and face of Team Mario. Super Mario faces off and teams up with his rival-turned-friend Sonic The Hedgehog.
Luigi
The other famous Super Brother, the Green Machine Luigi joins the group to help lead Team Mario to victory.
Peach
The Princess from the Mushroom Kingdom has taken a break from getting kidnapped and will help Team Mario win the Olympics.
Yoshi
Mario's good dinosaur buddy. He takes on the Olympics with his great speed and excellent jumping prowess.
Advertisement:
Bowser
The big bad King of the Koopas and Mario's eternal arch-enemy. He takes a break from princess kidnapping and goes for the gold instead. Of course, he wouldn't be Bowser if he didn't cause some measure of trouble in the Olympics...
Daisy
The energetic Tomboy Princess of Sarasaland and Peach's good friend.
Wario
Mario's very greedy and twisted counterpart.
Waluigi
An oddball character who sees himself as Luigi's rival.

Bowser Jr.
Bowser's son and the Prince of the Koopas.
Donkey Kong
The famous and iconic Jungle Hero of DK Island.

Nabbit
From New Super Mario Bros. U, the rabbit thief goes for the gold.
Diddy Kong
From Donkey Kong Country, Donkey Kong's little buddy and adventuring partner.
Rosalina
The mysterious protector of the cosmos from Super Mario Galaxy. Having seen previous Olympics from the reaches of space in her Comet Observatory, she has decided to join the fun in person.
Birdo
From Super Mario Bros. 2, A quirky pink dinosaur lady who wears a bow.
Ludwig von Koopa
The blue-haired member of the Koopalings.
Wendy O. Koopa
The Sweet (but sour) female Koopaling.
Roy Koopa
The sunglasses-wearing bad boy of the Koopalings.
Larry Koopa
The youngest of the Koopalings.
Dry Bones
Once a Rival, Dry Bones makes his playable appearance in Rio 3DS.
Dry Bowser
Bowser's skeletal form. This bony transformation grants him the agility of lightweight competitors while maintaining his heavyweight power.
Toad
Princess Peach's little mushroom retainer upholds the rules in the Olympics. He's actually a crucial part of the team in the games' story modes. He finally becomes playable in the Wii U version of Rio 2016
Toadette
Introduced in Mario Kart: Double Dash!!, the female counterpart of Toad finally joins the festivities in Tokyo 2020 as a replacement for him. 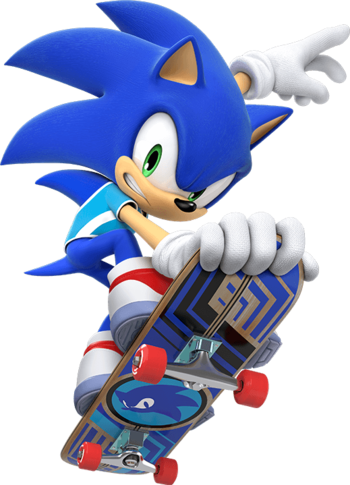 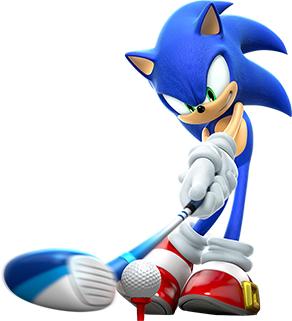 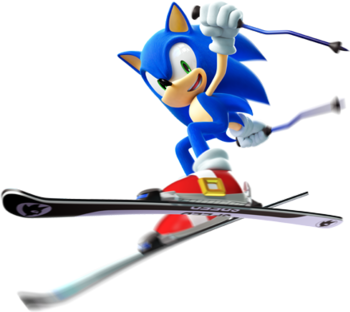 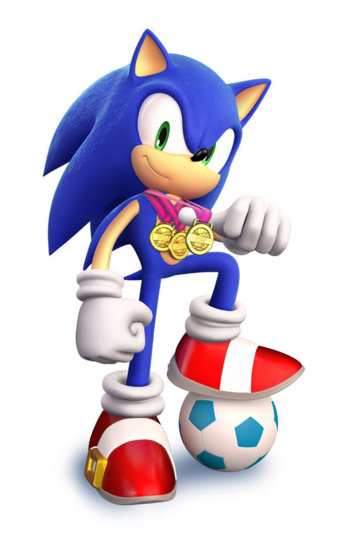 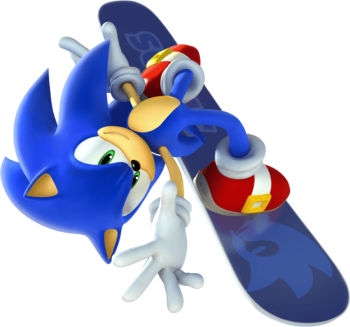 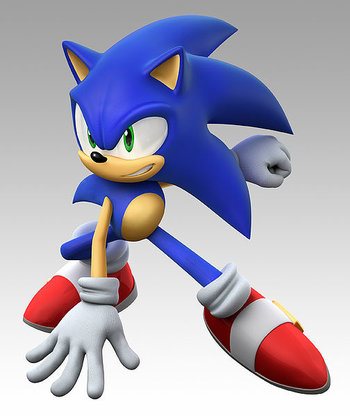 The world-famous supersonic hedgehog, the namesake of Team Sonic, and Sega's mascot.
Tails
Sonic's two-tailed fox buddy who's very excellent with machines.
Knuckles
Hailing from Angel Island, Sonic's good buddy Knuckles goes for the gold.
Amy
Sonic's so-called girlfriend. Hoping to win Sonic's heart, Amy takes on the olympics.
Dr. Eggman
An evil mechanical Genius and Sonic The Hedgehog's eternal Arch-Enemy. While he too wants the gold, he'll team up with Bowser to cause trouble.
Shadow
The Ultimate Lifeform and one of Sonic's most enduring rivals.
Vector
A lumbering music-loving Crocodile who runs the Chaotix Detective Agency.
Blaze
The Flame Princess from the Sol Dimension jumps to another world to have some fun in the Olympics. 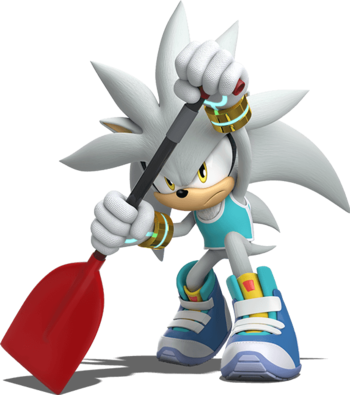 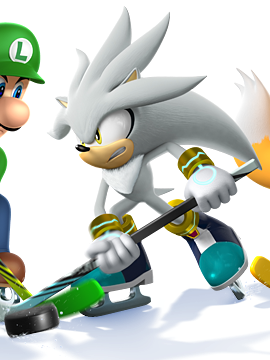 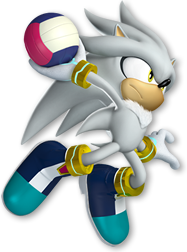 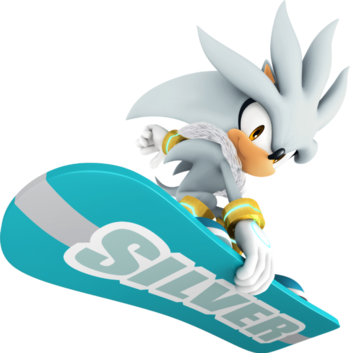 The mysterious being from the future with psychic powers.
Metal Sonic
A cold, wicked robot created by Dr. Eggman for the sole purpose of matching and destroying Sonic. Whichever is good.

Rouge
A seductive, sassy bat girl who was once one of the rival characters, but takes part in the Olympics for real in Rio 2016.
Cream 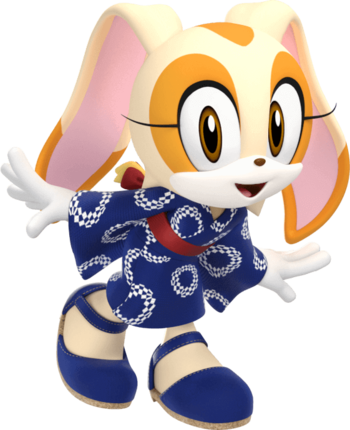 Tokyo 2020
A little rabbit girl with a Chao named Cheese who always tags at her side. She teams up with Toad to handle the host and ref duties for the Olympics. She becomes playable in the 3DS version of Rio.
E-123 Omega
One of Dr. Eggman's robots. The last of his famous E-Series Line.
Espio
The chameleon ninja member of the Chaotix Detective Agency.
Jet
The cocky leader of the Babylon Rogues from the Sonic Riders series.
Eggman Nega
Dr. Eggman's strange descendant.
Zavok
Zavok is the strongest of the sinister Zeti and leader of the Deadly Six. As the last disciple of Master Zik, he's a certified force to be reckoned with. His greatest joy is in improving his skills, which makes the straight-forward competitive nature of the Olympic Games quite appealing.
Zazz
The wild and crazy member of the Deadly Six, Zazz is every bit the metalhead he looks like. His competitive style is a bit chaotic than is usually seen in the Olympic Games.
Wave
From Sonic Riders. The expert mechanic member of the Babylon Rogues, Wave the Swallow joins Jet in the Olympics.
Sticks
From the Sonic Boom universe, Sticks the Badger goes for the gold.

Mii
Customizable avatars that have been appearing on Nintendo platforms since the Wii. They are playable in here, and are given a great deal of importance in Rio 3DS's story mode, "Road to Rio".

Lakitu
The famed four-eyed Koopa in a cloud has moved away from the track and takes up the ref duties in the Olympics.
Charmy
The third member of the Chaotix Detective Agency. This little bee guy makes himself busy.
Orbot And Cubot
Eggman's two robot lackeys. Orbot is the smart one and Cubot is the dumb one.

King Boo
The Big Boss of the Boos. He is one of the rivals, but also plays as a flunky minion for Bowser in the story modes.
Big Bullet Bill
An unusually large Bullet Bill.

The Snow Spirits
Frosty, Sparky, Pola, Cuby, Icy, and Blizza, the Snow Spirits are a team of six characters in Vancouver DS' Adventure Tours. They're the controllers of snow in the region, so Bowser and Dr. Eggman kidnap them to abuse their powers. Of course, the duo of Mascot heroes set out to free them and make things right again.
The Phantasmal Fog
A mysterious colored fog that is the main part of the story in London 2012 3DS, Dr. Eggman and Bowser use it's power to exact revenge on the characters for being left out of the London Olympics.
The Suit Boys
In Rio 2016's Road to Rio Story mode, the Suit Boys are two Miis wearing Mario and Sonic Suits. They look like average NPCs, but perhaps there is more to them than is being let on...

VIPs and Other NPCs

Shy Guys
They're Little guys who wear robes and masks that hide their face (Or their mask is their face, we don't know).
Chao
Tiny creatures that can take many different forms.
Toads
The main denizens of the Mushroom Kingdom, who have mushroom like heads and come in many different colors.
Penguins
From Super Mario 64, Penguins who have learned how to walk and talk.
Egg Pawns/Badniks
Dr. Eggman's rank-and-file robots.
Boom Booms