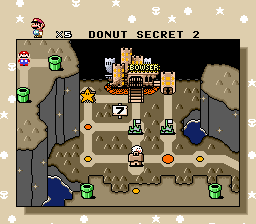 In video games, normally one expects all playable parts of a level to be reachable from one single point. It might not be a point you can get to without unlocking a whole bunch of things and even backtracking from later in the game, but it still ought to be there.

But sometimes, you just can't get there from here (or here from there). You've found a side area that is ostensibly part of the level, perhaps even can be seen from other parts of the level, and in fact playable (not just for show), but you have to go around (often a long way around) to get between. The more infuriating of these are located behind an Insurmountable Waist-Height Fence. On the other hand, you may find an area early on in the game that gives you a sneak preview of a much later level. Or there may be a Door to Before that leads back to the main area.

Common in Metroidvania style games and some RPG titles.