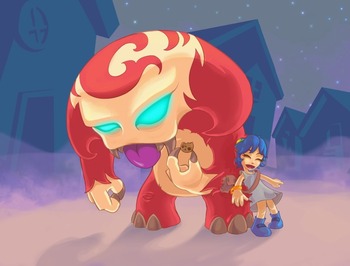 They're so cute when they grow up...
Advertisement:

Monster Tale is a 2011 Nintendo DS game from the short-lived developer DreamRift and published by Majesco Entertainment.

The game tells the story of Ellie, a little girl that is woken up in the middle of the night by a loud noise. Upon investigation, she finds a strange bracelet. All of a sudden, the bracelet glows and transports Ellie to a different world, populated by new and strange creatures, referred to as monsters. Not long upon arriving does Ellie finds an egg, which hatches a small and cute creature that Ellie dubs "Chomp". Now, Ellie and Chomp must travel through the monsters' world so that the girl may find a way home. She soon learns that she and her new friend are destined to liberate this mysterious world from the rule of five evil children.

A creative mix between Metroidvania and virtual pet raising sim, the game was created by the same people behind the equally Genre-Busting Henry Hatsworth in the Puzzling Adventure. While traversing the overworld as Ellie, the bottom screen on displays Chomp residing in a pocket dimension, who will come out to aid Ellie in combat. Depending on how you decide to make use of and raise Chomp — from whether you use him for defense, healing, or as an additional source of damage during a fight, to the type of toys and foods you give to the creature to play with and eat during downtime — he will evolve accordingly: growing more powerful, gaining different abilities, and transforming further into even more specialized forms.

Plans for an Updated Re-release called Monster Tale Ultimate for the Nintendo 3DS were announced in 2015, but thanks to Majesco being bought out by a biotech company the following year and immediately ceasing video game operations, nothing ever came of it. In January 2021, years after Majesco changed hands again and re-entered the industry, it was announced that they once again planned on remaking the game for current consoles

— whether this project will also succumb to the same fate as Monster Tale Ultimate remains to be seen.