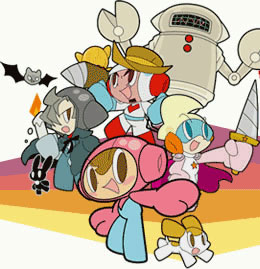 "Cash you say? Does that taste good? I want some too!"
—Taizo Hori, Mr. Driller: Drill Spirits
Advertisement:

Mr. Driller is a spin-off series to Namco's Dig Dug. First released in arcades in 1999 and on the PlayStation and Dreamcast in 2000, the game stars young Susumu Hori (the son of Dig Dug's protagonist Taizo Hori and Baraduke heroine Toby "Kissy" Masuyo) in a race to drill through multiple colored blocks as far as he can without running out of air or getting crushed. Falling blocks of the same color will meld together, and disappear if the resulting combination is more than four blocks long. Air capsules appear every so often, and must be picked up to ensure survival. There are other hazards, such as the aforementioned falling blocks, and "X" blocks which, if drilled, cover you in poisonous gas that takes away from your Oxygen Meter.

The series combines elements of a fast-action arcade game and a puzzle game, due to the importance of watching how the blocks will fall as your character descends further into the earth.