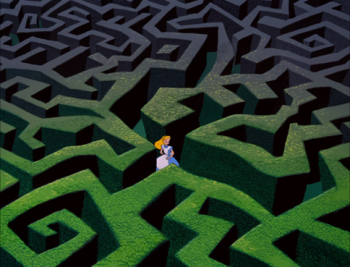 Try to find your way out of this.
Advertisement:

The Hedge Maze is a type of Maze found in ornamental gardens with walls made out of hedges, often found on the grounds of a Bright Castle, Haunted Castle or Big Fancy House. They are generally perceived as mysterious and magical, and sometimes foreboding, and if one is mentioned in a story chances are at some point the characters will have to find their way through it, perhaps while being chased or trying to beat the Villains to the center. The hedge maze often doubles as Mobile Maze and the paths paradoxically seem to move around as you're trying to navigate it. In the center is what the maze is protecting, often something magical and valuable that The Hero needs.

In mystery stories, you can count on finding a corpse in one of these. Since they're almost always a part of the gardens of a country house, you can expect the usual country house doings to be brought into it. Somebody seeking privacy goes there so as not to be disturbed, only to be permanently rendered past disturbing by a killer. Clandestine meetings are arranged, again often in the center of the maze, for important private conversations (like, say, blackmail). Lovers go there for a rendezvous. There's a house party scavenger hunt or village festival on the grounds, and one or more of the revelers goes inside. There may even be more than one trip inside the maze, especially if there's a reconstruction of the initial crime and/or a trap set for the killer.

The hedge maze was a must-have part of Western European gardens in the 16th and 17th centuries, including Hampton Court Palace in the UK. You can see maps, photos and engravings here.

Mazes in general, but especially the hedge maze, tend to be symbolic of navigating the subconscious and discovering the self. While overcoming the maze, the character confronts their own darkness and fears.

A subtrope of The Maze. Compare The Lost Woods and Lost in the Maize.

In one section of the Botanical Gardens there's a large hedge maze with a Nestler inside.

In one section of the Botanical Gardens there's a large hedge maze with a Nestler inside.