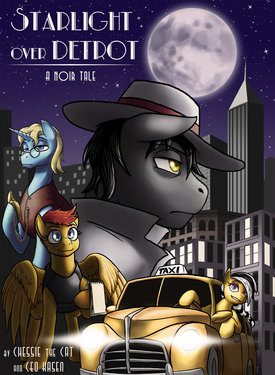 Sic itur ad astra...
I've lived in the great city of Detrot all my life. Ambitions of traveling the world gave way to the cold-shower realization there weren't a lot of places out there more suited to a cop than a city full of crime.
Hard 'Hardy' Boiled
Advertisement:

They say things didn't use to be like this. They say things were different, before Luna came back 60 years ago, but Detective Hard "Hardy" Boiled of the Detrot Police Department has never known any world other than that demarcated by the seedy streets of his beloved decaying metropolis; a world in which the coroners sing and dance, surveillance bugs have personality disorders, and the Chief of Police is a scarier entity than most of the eldritch things the city attracts.

The grey unicorn who turned up dead outside the posh High Step Hotel seemed like just another case, but her missing horn is the pointy tip of a very large and nasty iceberg. It's up to Hardy and his friends — a rejected monster hunter, a psychic cab driver, and an underground antiques heir — to find out what’s going on in an investigation that promises to turn Detrot upside-down and inside-out.

Especially if Hardy has anything to say about it.

The main plot can be found here

, and the Side Story, "Nightmare Night" is available here