"Have your 'nocs at the crossroads." 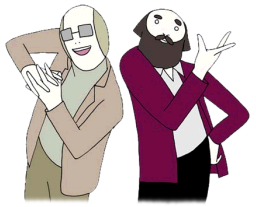 Professor Brothers is a web based series of shorts by Brad Neely that used to be based in Super Deluxe.com but is now a series, China, IL, on Adult Swim. The series focuses on two brothers: Professors at a Community College named Steve and Frank.