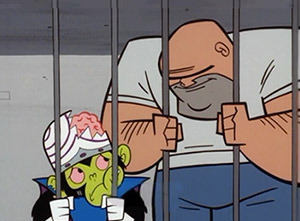 "I'm going to get this [poison] analyzed. Then you're going to jail, where you'll be ANAL-yzed!"
— Jonathan Joestar to Dio, JoJo's Bizarre Adventure Abridged
Advertisement:

A trope in which it is stated, shown, or implied that detainees may be sexually assaulted while in prison (usually by fellow prisoners but sometimes by their captors).note It should be noted that changing attitudes about the treatment of prisoners has made this trope far less common in real life than is often portrayed, at least among Western countries. In particular, the United States (which has a special reputation for rough prisons) now has the very strict PREA laws, which both forces prisons to minimize opportunities for sexual assault and harshly punishes prison rape, which now almost automatically incurs a life sentence. Of course, enforcement of this varies by region, but coerced sex is no longer the institution it once was in US prisons. It is used in a number of ways:

As with all rape tropes, please refrain from listing real life examples. It is entirely sufficient to note that such things do occur.

Lieutenant Crow tells Duke that poetic justice is about to be served.

Lieutenant Crow tells Duke that poetic justice is about to be served.